There are so many speculations on the subject of plagiarism that it often becomes very confusing to understand what things are authentic and what things are plagiarized. People sue each other for plagiarism, businesses sue their competitors for plagiarism, about 30% of students use the Internet to plagiarize their papers, etc. Proving someone stole your intellectual property is a difficult task and may take months or even years. It is even more difficult when we are talking about stolen ideas rather than written content as commonly addressed in educational and scientific settings. Fashion industry for example is a very difficult area for identifying and proving plagiarism due to the nature of this narrow field. One can take two similar dresses created by famous designers and say that this is fashion plagiarism, while other can say that these two dresses demonstrate the synchronization of ideas in the fashion industry. It is difficult then to draw a clear line between fashion plagiarism and interpretation of popular fashion trends…

Professional designers work hard to create their clothes. It takes time and passion to design things that would become worldwide fashion trends. Well-known designers usually create clothes famous people wear during top notch events that are covered by media. And when everybody has a chance to see what kind of clothes famous people wear it is very likely that cheap rip-offs will appear soon in the little shops around the whole world. Obviously, they will have a different quality of the material, but the cut and colors would be similar. For example, not long after the creations of Hemant and Nandita has been released, people could easily find rip-offs in many shops. Those were fakes but that’s how it works in the fashion industry.

Such cases don’t make fashion scandals though. It is when a well-known designer plagiarizes another professional designer the world of fashion truly awakens. Any fashion scandal is usually associated with big names like Armani, Cavalli, Versace, Cardin, etc. For example, over a year ago Roberto Cavalli accused Michael Kors of plagiarism. If you take time and compare the works of two designers it will be pretty clear why Cavalli calls out Kors. There are certainly patterns that prompt to think of Michael as a copycat. Not so long ago there was another fashion scandal associated with Balmain’s collection. A white pant suit that had cut-open panels was very similar to what Alexandar McQueen presented 18 years ago for Givenchy. If you search through online fashion galleries it will be easy to identify the similarities. As we have said, it is difficult to differentiate between an inspiration and a rip-off.

An interesting incident happened during one design show in S. Korea where one of the contestants was highly ranked in one of the evaluations. Yoon Eun Hye, an actress, has won with the design that resembled the work of a fashion designer Yoon Choon Ho. The professional designer believes he is the victim of fashion plagiarism as the actress clearly used his idea of wing-like sleeve laces on a white coat. It is really fascinating how similar the sleeve design idea Yoon Eun Ho used is to what Yoon Choon Ho developed in one of his collections. 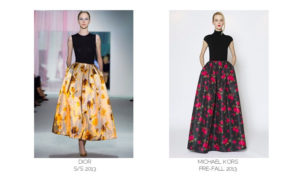 The aforementioned cases prove that fashion plagiarism is a very tricky thing. It seems like there is no way to define where the boundary between individual interpretation, synchronization of ideas, and fashion plagiarism is. Since fashion is an art, you can probably be safe to assume that it is impossible to distance oneself from the influence of previously developed designs that established fashion trends. Therefore, we should allow some space for inspiration from fashion trends because that’s how new things come up – they are usually built on what existed before. Nevertheless, we should say that it is not an excuse for blatant plagiarism. Whether we want it or not, plagiarism affects the fashion world. And there is only one thing designers can really do to protect their own fashion innovations – it is to register one’s designs and developments.

Cases of Plagiarism in Literature Which You do Not Suspect

Ideas are hard to get especially if you are trying to come up with new ideas of your own. This is one of the main reasons as to why most people are always copying and pasting ...

Plagiarism is a huge problem in modern Russian universities. While the particular problem was not even an issue in the times of Soviet Union known for its upraised standards of higher education, current situation with plagiarism in Russia has a drastic nature. The evolution of the internet and the availability of an access to unlimited ...